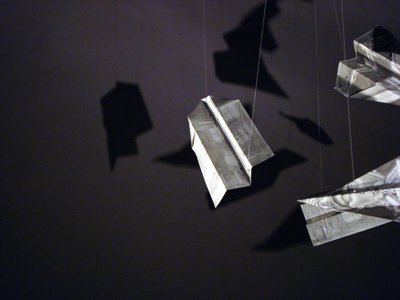 Flight Plans derived from notions of memory and weight. After visiting Europe Richards could still remember textbook images more clearly than the actual art. Working through the ideas of translation from the original sculpture to new media he drew the sculptures of Michelangelo and Bernini from photographs, and offering them a differnt incarnation, folded the drawings into airplanes, allowing for a lightness that did not exist in the original sculptures, He photgraphed the planes in a dogfight, in which Michelangelo’s “David” burned.

The dogfight images were then used to create ‘propoganda’ paintings commemorating the war. Several of these paintings were then cut apart and reassembled into more modernist sculptures. This exhibit was developed and executed in one month.