“I am left with only impressions of the architecture… the most important thing is to feel the city.” ~ Walter Benjamin 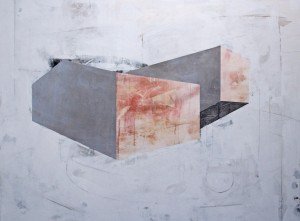 With several paintings on temporary display at Three Squared Patrick Brien offers Nashville a series of well-executed, tightly themed architectural abstractions. Subdued in color palette, the formal compositions primarily feature compositional interplay between figure and ground, often with a singular architectural mass. Strongly delineated by line work, this structural entity at once maintains form while denying a plausible reality. This primary shape has a direct influence on neighboring shapes, overlapping and subverting their color schemes.

Strongly graphic in composition, the temptation to see beyond the merely formal shapes is rewarded upon close inspection: Brien occasionally scrapes areas of opaque paint aside revealing a density of delicate layers highlighting a surprisingly warm coloration and diagrammatic line work, as if exposing the warm skin and inspiration beneath the facade. Knowing the painting’s foundations are architectural ideograms, each piece begins in a precise, rational language of creativity where precision is paramount, yet the language is partially eradicated as the composition moves forward taking on an identity as a hierarchy of form must be established, lending each work a tactile, personalized feeling at odds with the cold Euclidian geometry of schematics. 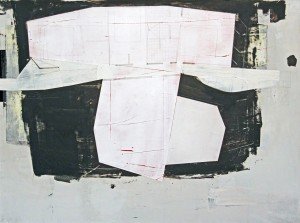 The compositions typically are rendered as a series of flattened shapes compositionally layered on top of each other, with the occasional trapezoidal plane or line work implying depth by parroting the language of perspective drawing. Through overlapping color change, perspectival shapes and lines, Brien uses the vocabulary of illusory depth. Ironically the works do not actually seek to portray deep space: they rely on visual surface texture, color balance and translucence to thwart illusionistic solidity. In manifesting this spatial ambiguity the works attempt to maintain a level of balanced tension, successfully producing both anxiety and stability for the viewer. 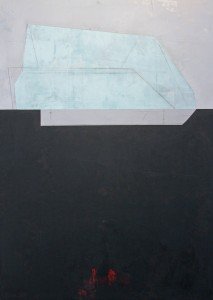 The flattening, or denying of illusory space (as a way to relieve anxiety) developed originally as a reaction against Renaissance perspective systems, which as Walter Benjamin says, created “room to move.” At the turn of the  20th Century, a desire to collapse or flatten this space was linked to an outbreak of spatial anxiety disorders such as agoraphobia and claustrophobia.[1] People had a paralyzing fear of space, either too much of it or not enough of it, which was linked to people’s lives in the oppressive, labyrinthine architecture of modern cities. To further reduce this crippling perception of space the window developed a new role as a way to foster psychological distance in which one could continue to move and maintain a level of inner contemplation without engaging either real space or the humanity outside. Viewing of exterior images through a window flattened them on a two-dimensional plane, allowing objects to become shallow, freed “from their disquieting environment,” allowing distance from which to contemplate the infinite.”[2] 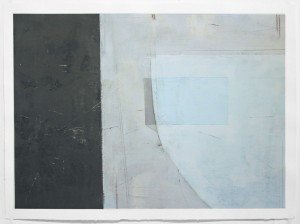 Engaging in the flattening space, in this context, implies that the artist’s paintings are mediating the tension between the inner (psychological) and outer (physical) worlds. As such, each work must navigate between the creation of an elusive, personal and non-objective world while being able to generate enough exterior references to remain compelling and accessible. The strongest works in the exhibition, Vantage and Frost Haus, offer a refined, stable composition with a mysterious architectural form that speaks of familiar complexity, yet remains indefinable. Overall, Brein’s exhibition is one of the most delicate, serious, and accomplished painting shows I have seen in at least two years.