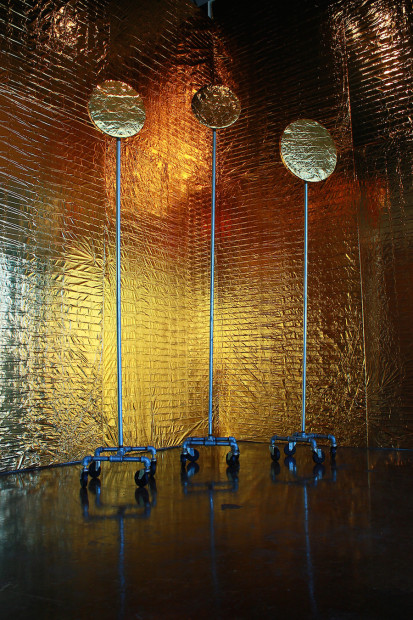 Entering the gallery, one is confronted with the spectacle of a room lined with gold emergency blankets. Typically a life-saving device, Dijulio dismisses their primary function in favor of superficial radiance. The move asserts an artificial staging-ground in which potentially meaningful and useful objects become valued only as superficial reflectors and indicators of wealth. 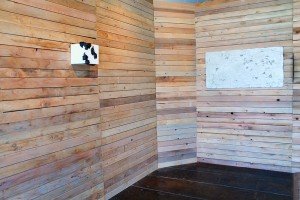 A wall of cedar stripping offsets the gold room and blocks immediate entry into the main gallery. The wall’s horizontal banding echoes the geometry of two Plexiglas cubes, homages to Judd, rendered filthy with a disgusting tar-like substance. An aluminum-colored plaster cast in the center of the wall has quasi-intentional ripples, as if the plaster was spilled into a plastic sheet. Both works reference formal art objects yet offer intentionally casual craftsmanship, which plays off the show’s tightly designed environment. The entry presents Dijulio’s didactic language of material contrasts: organic is paired against opulent, and excessive geometry stages the loose gestures. 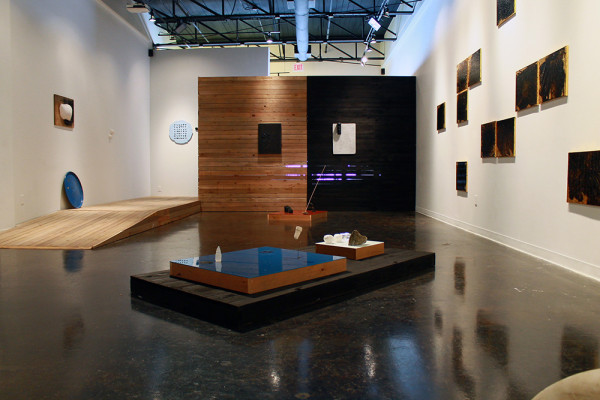 To enter the main space, one climbs a low ramp onto a platform that goes around the cedar wall, then slowly descends, offhandedly calling to mind the ramp in Vito Acconci’s Seedbed.  Dijulio’s ramp acts as an architectural framing device, a barrier visitors must cross to actively accept engagement with what’s within. 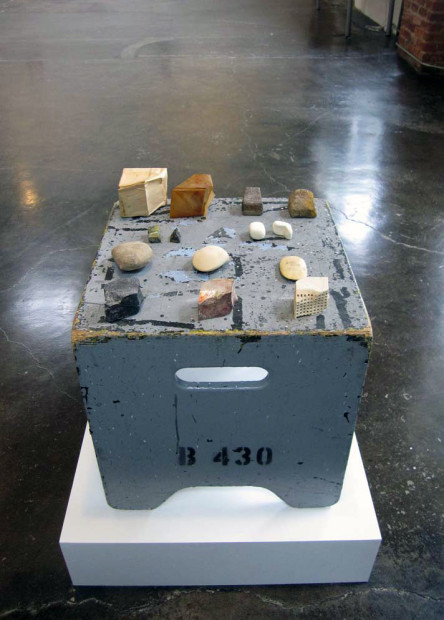 Inside, several low plinths of colored Plexi and raw wood sport collections of enigmatic objects. Seemingly inconsequential studio afterthoughts, they gain import from being perfectly aligned on perfect surfaces. In James Sullivan’s work from The Art Foundation’s Fountainheadexhibit, several stones and simulacra of stones each bore distinctive meaning and memory. Dijulio’s objects are neither indexical nor harbingers of memory, instead they present a meta-narrative on the art world’s casual acceptance of any ordered situation as art. 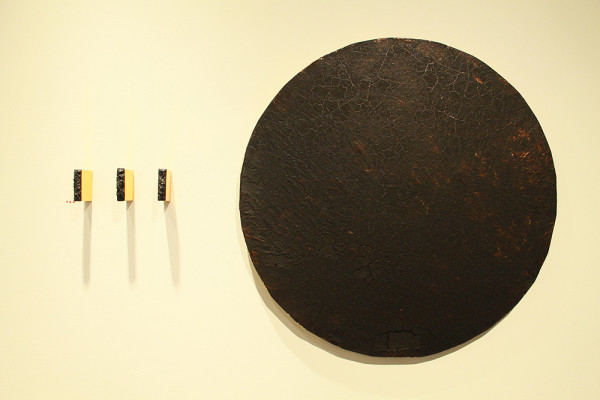 Several enigmatic pieces pose similar assertions: sporadic groupings of gold-foil canvases stained with dissolved tar; Dark Mirror, a round disc thickly coated in tar and balanced by three miniature rectangles of reflective gold. Nearby, several ambiguous constellations of plaster blobs squeeze out from the gallery walls, choked into life by gold nylon rope. There is art world alchemy to these material pairings: the superficially vibrant and beautiful only become worthy of being art when introduced to the base. The common is made meaningful only through degrading symbiosis. 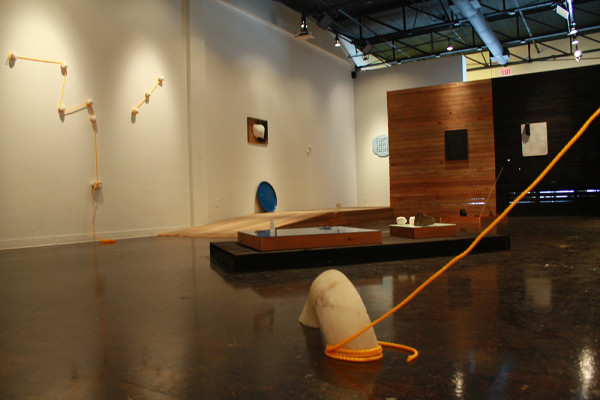 The show’s title, Constellation Logic, hints at the process of imposing symbolic order on a chaotic system, as constellations are created by connecting disparate stars. The organization of Dijulio’s works implies such diagrammatic thinking without offering a key to decipher it. The works do not seem to be interested in applying, illustrating, or overlaying an outside content onto the work, but instead treats the organization of constellations as a stand-in for the visual aesthetic of intelligence: a formal puzzle solved by careful alignment.

Constellation Logic was on view at Circuit 12 Contemporary in Fort Worth from April 5-May 12, 2014.