Utilizing advancements in “pink noise sound control,” most commonly used as sound privacy technology in open office floor plans, schools, and confessionals, we propose to erect an office ceiling outdoors under which conversations can be muted or distorted with ambient pink sound.  Confounding these efforts at privacy there will be sound imported from the fair’s interior pavilion played back at our exterior venue as a form of ambient conversation. The installation attempts to balance the cultural, social, and personal need for auditory privacy with the desire to be unilaterally included in the community conversation. 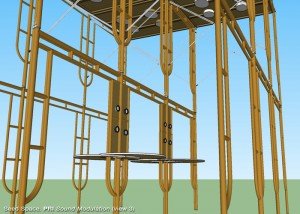 Constructed primarily from accessible, cheap resources—such as scaffolding built from reinforced cardboard tubing and speakers made from tin foil— the venue will resemble an urban construction site with stations mapping sound progress and patron interaction as they record themselves and test the viability of the system. The materiality of the DIY site offers a counterpoint to the refined technology being used, calling into question the social stratification of sound privacy. Traditionally, only distance or designed physical structures offered sound privacy. However, by offering access to these tools at a personal level, such as our “pink noise” iPhone app, these distinctions of infrastructure and access become increasingly diversified. In efforts to further engage this discussion of privacy we will live stream video and audio of the interactions online.

Update: Sound Modulation was accepted to NADA Hudson 2012 in June, but due to circumstances outside of our control PRI was unable to participate in the event.

Bux Toof is a collaborative art group founded by Daedalus Hoffman and Lindsay Starr, founders of …