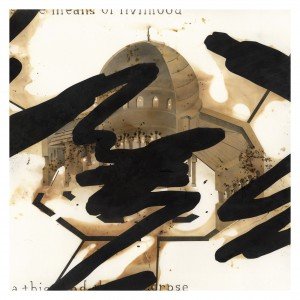 Ryder Richards
Utopia: A Thief and Then a Corpse
digital print of gunpowder and pigment on paper drawing
sizes: 16″x 16″ or 8″x 8″ [link]

> Grove & Ceremony interview with the artist.

Part of the Utopia: Practical Notions series, the work looks at the Dome of the Rock as the temporal/spatial center of the world, according to David Flynn’s interpretation of Sir Isaac Newton’s apocryphal texts. Newton partially hid his hypothesis as he was certain that only those who worked to gain knowledge would understand it or use it wisely: an elitist, occult strategy. Drawing parallels between governmental power systems, conspiracy, and a tendency for knowledge/power to maintain hierarchy  the work also references the loss of human values to government or utopic machinations quoting Sir Thomas Moore’s “Utopia.”

“Instead of inflicting these horrible punishments, it would be far more to the point to provide everyone with some means of livelihood, so that nobody’s under the frightful necessity of becoming first a thief and then a corpse.”