Today we’d like to introduce you to Ryder Richards. 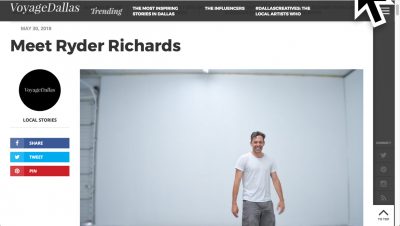 Thanks for sharing your story with us Ryder. So, let’s start at the beginning and we can move on from there.

I moved to the DFW area in 2009 to run the art galleries at Richland College. This came after running art galleries in Lubbock and somehow reaching escape velocity with the aid of Ryder truck we turned into a mobile art gallery. In Dallas I tried to bring in a few shows to the college that challenged the norm, such as Richie Budd’s techno rave machine, which prompted a D Magazine article on the gallery.

Along the way I made some friends and we formed a group called “The Art Foundation.” We put together a few shows featuring a mix of DFW artists with international artists, which lead to a large book of Duchamp’s toilets being accepted into the collection of the Nasher Sculpture Center. The following year we curated an art exhibition called “Boom Town” at the Dallas Museum of Art.

Though curating shows landed me in Dallas, I am primarily an artist who occasionally writes art reviews. I try to stay busy by attending art residencies and participating in about a dozen shows a year. In addition, a few years ago I founded the art review site “Eutopia: Contemporary Art Review.”

Overall, has it been relatively smooth? If not, what were some of the struggles along the way?

Ha. Not really. But speaking of roads: I have had the radiator go out on a truck loaded with hundreds of thousands of dollars of art in the desert, had multiple tires blow out on a trailer loaded down with art while going 75 mph, and flipped a car during an art residency and crawled out directly into poison ivy.