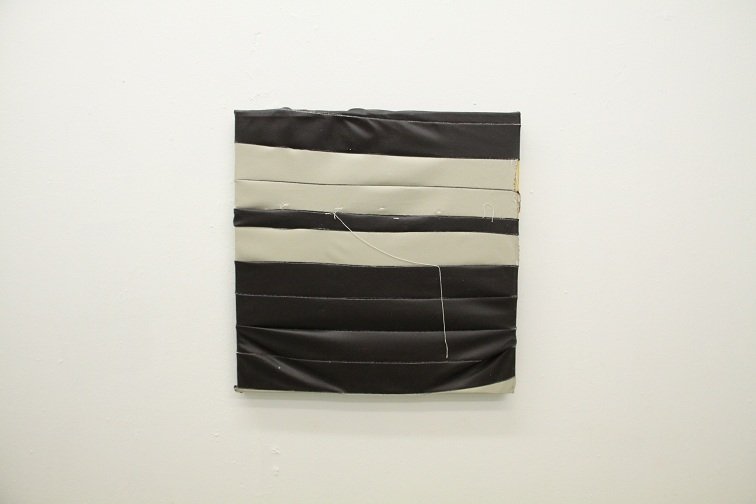 A little over a month ago the Texas Theatre hosted a performance art film screening featuring documented works by Douglas Davis, Joesph Bueys, Nam Jun Paik, Artur Barrio and others. This museum quality event was an additional facet of the arts attack known as the Dallas Biennial 2012, or DB12 (not to be confused with the Dallas Contemporary’s Dallas Biennale). Paying out of pocket and negotiating permissions rights to display several art films, Stephen Lapthisophon, Michael Mazurek, Jesse Morgan Barnett, and CJ Davis have provided an insightful, educational experience from which to reconsider not only art today, but how quirky, exciting and intense it was 35 years ago.

After the refreshing and occasionally humorous set of videos, I stopped by the Dallas Contemporary, which was hosting the D Magazine FrontRow Liveevent. Tickets were $15 to listen to Ben Aqua and STRFKR, but it was worth another $15 to experience the sound video piece by Michael Morris inside a blacked out Chevrolet car. Morris’s mounted video projection inside the car reflected light into the driver’s eyes through the review mirror. As a video projection plays a soft voice asks the participant to close their eyes, feel their body in contact with the seat, and proceeds to offers a series of hypnotic, self help mantras inducing a state of receptive bliss. A slow build of bass pulses out of the speakers, slowly intensifying into a pummeling throb as the projection begins a light strobe forming geometric patterns against the inside of your closed eyelids. The experience was empowering and profoundly personal, heightened by a surreal exit from the vehicle into a crowd of unknowing revelers. 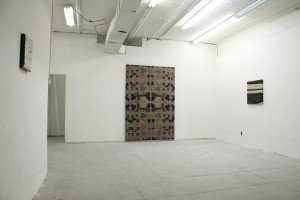 At Oliver Francis Gallery, I was both impressed and subdued by the work of Arthur Pena. The works follow a formula for creating paintings: bleach fabric, then collect paint store color samples to match the bleached fabric, and then, out of the 5 samples offered, choose the least likely color to match (the error). It is a process that allows the size of the stretcher to determine the number of colors, so, for example, a three foot square has three colors. There are several more steps written in the catalog as a quasi-mathematical formula bracketed by movie quotes and self-flagellating existential and often banal texts. Veering away from the Sean Scully echoes these could easily become, Pena manages to keep a raw humanity in these pieces through his intentionally rough handling and dicey craftsmanship. The work is another example of younger artists returning to the shape of early formalist painting imbued with a purposeful negation of craft or sincere awkwardness. 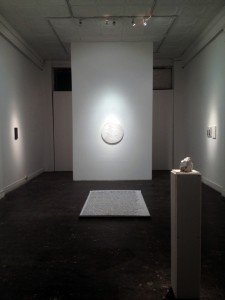 The Angstrom Gallery’s latest exhibit, Controlled Substances, features a group of affiliated artists who asked Kevin Jacobs to select specific works for display. I visited the exhibit twice. The first time was with out of town art friends, who were completely put off by the work, considering it either lazy or purposefully obscure. They were grasping for an absent conceptual handrail, preferring the straightforward hit-and-miss of the “Hot N Sweaty” open show at 500X. However, the sparse installation at Angstrom allowed each work to be considered in isolation, a context in which I found several pieces compelling: Kelly Kroener’s fabric form discarded in the corner, Joshua Von Ammon’s large print of rap lyrics on the floor, several of Alex DiJulio’s collaborations, and Eli Walker’s raw sheetrock pedestal with what seems to be a crumpled painting on top.

I also stopped by El Centro College to check out the collaborative and ever changing exhibit Suplex by Jesse Morgan Barnet, Michael Mazurek, and Jeff Gibbons. Suplex proved to be a fun, if baffling, installation that feels as in one walked into the middle of an unfinished conversation. The exhibit’s stripped down aesthetic considers the offensive efforts of simulacra as either a valid, if mundane, authority, or a gesture of defensive posturing. Or maybe it was a group of artists having a great time and I am just not in on the joke, which I like equally as well.

The MAC also has a nice show by Terry Hays featuring a series of totems obsessively painted to mirror a backdrop that is both landscape and optical foil. Commenting on land, nature, and myth, the work’s complexity requires first hand viewing.

I also made it out to Margaret Meehan and Heyd Fontenot’s art talk at Conduit Gallery and the first “Open Studios” held by UTD CentralTrak. The Open Studios tour was a great way to see some terrific artists in their element.Danielle Georgiou was displaying a new video of a pursed lip, head gyrating woman using urban slang to insist that some men would want her back, while the video occasionally distorted turning her into a monstrous array of colors. A fairly new artist-in-residence, Nathan Green, had a series of dense, vibrant pieces showcasing a myriad of optical and formal experiments, while across the hall, Dominic Hawgood had some smart photographs documenting the profile of commercial signs.