Gallery Hopping: A Diversity of Strong Shows Highlight A Month in Dallas Art

Gallery Hopping: A Diversity of Strong Shows Highlight A Month in Dallas Art

Dallas has some amazing art on display right now, and it feels like we have finally begun to narrow that gap between the established arts and the energetic alternatives. Typically, when gallery hopping, I find maybe two or three exhibits that I respond to. In the last week, I have been completely thrilled with the level of art on display around town.

Last week Conduit Gallery opened two stellar exhibits with Margaret Meehan and Hyed Fontenot, both exploring “otherness.” Fontenot calls into question the plight of homosexuals by constructing a large box doubling as a finished-out room, the interior loaded with prints and drawings. The works reflect the individuality of pithy, contentious bumper-sticker statements that call to mind the fury of the right against the GBLT lifestyle. Meehan’s tightly controlled, sparse installation features a density of symbolic content, mining the spectacle of otherness through an albino bearded woman boxer in Victorian attire. Aligning with the “Master Glass 2012” exhibition project, Conduit also has a stunning glass installation by Stephen Knapp in the Project Space, which, thankfully, avoids the obvious homage to Chihuly. 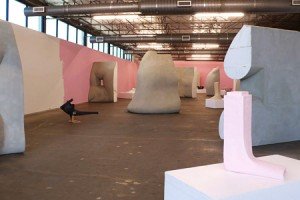 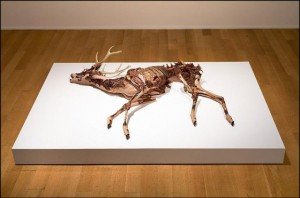 Swinging by the Nasher I saw Ernesto Neto’s new art jungle gym. The multi-colored, suspended netting is not nearly as seductive or refined as the spandex fabrics used in pieces like “Leviathon Thot”, however I was impressed by the interactivity and the sound made by feet on the squishy balls when passing through the colorful gullet. Erick Swenson’s work downstairs was great, ridiculously well-crafted and thought provoking. It makes me want to work harder and smarter. 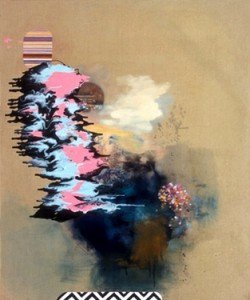 Moving on, I stopped by Public Trust, who had a great installation up by Mylan Nguyen and several tiny, humorous, cash-n-carry works of art by Taro-Kun. Similarly,Kirk Hopper Gallery had inexpensive prints of old-school Michael Jordan shoes by Sergio Garcia. Most impressive, though, were the sculptures and the sense of humor pervading in the works. Holly Johnson in the Design District has a great painting show by Jackie Tileston. There are several risky decisions in the refined works, such as a triangle pattern or ball of stripes, which should unbalance the composition, but the defying style and logic seem to enhance the work.

There were several things I missed due to life, but have received rave reviews from my friends or I have checked them out online.Homecoming Committee’s “Hands on an Art Body” seemed like the coolest, most interactive, and humorous exhibit to take place in some time. Ro2 Art-Downtown is also engaging in some interesting exhibits. The most recent exhibit is the Solvent’s “Working Title,” a collective installation allowing three ‘generations’ of artists to successively alter and add to the work of the previous ‘generation.’ Using a wide swath of students, professionals, and professors, the exhibit’s evolving nature and lack of authorship is the type of creative community enterprise that excites me. Speaking of community, the University of Texas at Dallas’ CentralTrakhas been doing an excellent job creating high-energy programming, hosting more events than I can keep with. On Thursday they put on another great panel discussion utilizing young artists and gallery owners (under 40) to discuss the “State of Emerging Arts”. This group stressed the need for action balanced by a need for more serious, academic critique grounding the work in larger conversations. (video here.)

I am sure there is more good art that I missed. I stopped by three galleries with doors locked despite the posted hours declaring them open. I think this typical as we move into the summer, so be sure to call before you drive to the venues.