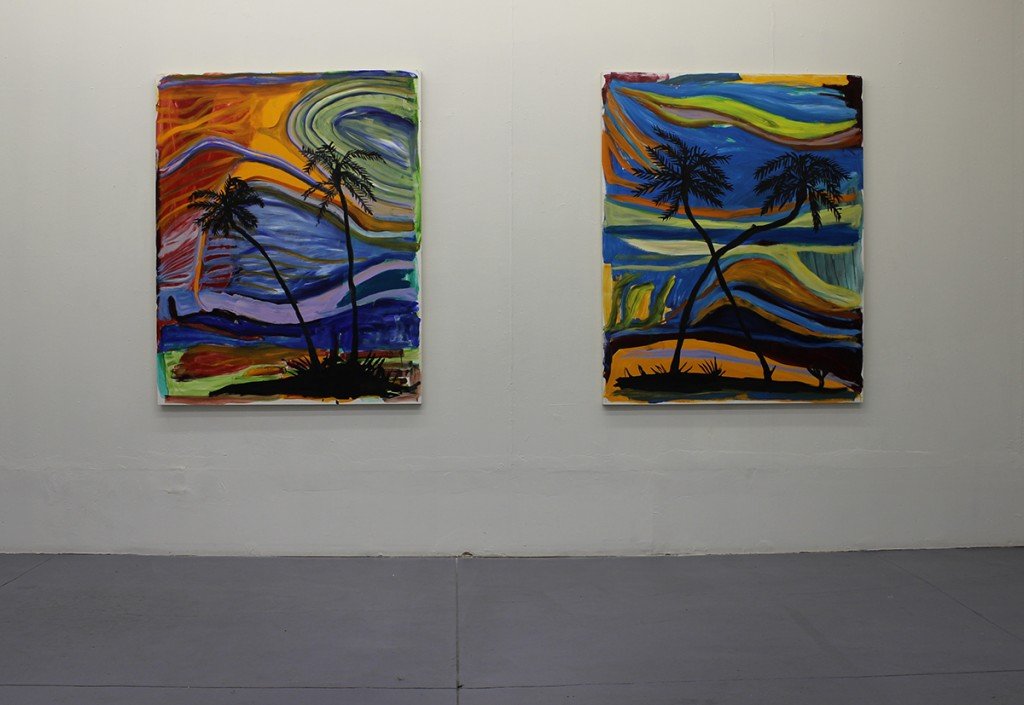 Josh Smith’s works are quite awful objects. Overwhelmingly kitsch paintings on canvas and poorly crafted ceramics demand consideration as art world commentary if only because of Smith’s success carried by Luhring Augustine Gallery [link] and a recent NY Times review where he was called a “sardonic conceptual-installation-painter” [link]. His recent work at Oliver Francis Gallery as part of DB14 offer shelves of childish ceramics and thickly painted palm tree silhouettes against a setting sun, both series sidestepping media virtuosity and presenting tacky, possibly juvenile, imagery.

His pair of paintings feature a pair of dueling palm trees backlit by a brightly lurid swirling sunset: a beginner’s attempt to channel a neo-expresionist Thiebaud. The foreground palm trees awaken a romantic West coast moment where the archetypal beach scene allows trees to be stand-ins for lovers, which is obviously kitsch, but difficult source material to pin down: perhaps early postcards or glimpses from movies they are eerily similar to the paintings made by a girl in my high school art class. This is exactly what Smith conveys: a juvenile romance of beginning painting, the joy of the sloppily executed and unsophisticated. More importantly, the paintings casualness is not that of the “new casualist” or “zombie formalism” that currently dominates a generation of painting where artists desperately avoid seducing their viewers with stable compositions, colorful palettes, lush paint, or imagery. These paintings are more playfully serious, using sappy, simple, cultural landscape reference and loose painting to undermine themselves as serious painting, which contradictorily makes it serious. This further begs the question: can painting be undermined? I approach them as a reactionary. Smith’s paintings poke all of my carefully honed aesthetic sore points becoming successful, not necessarily as paintings, but more as vehicles for challenging and undermining artistic prejudice or belief in craft. 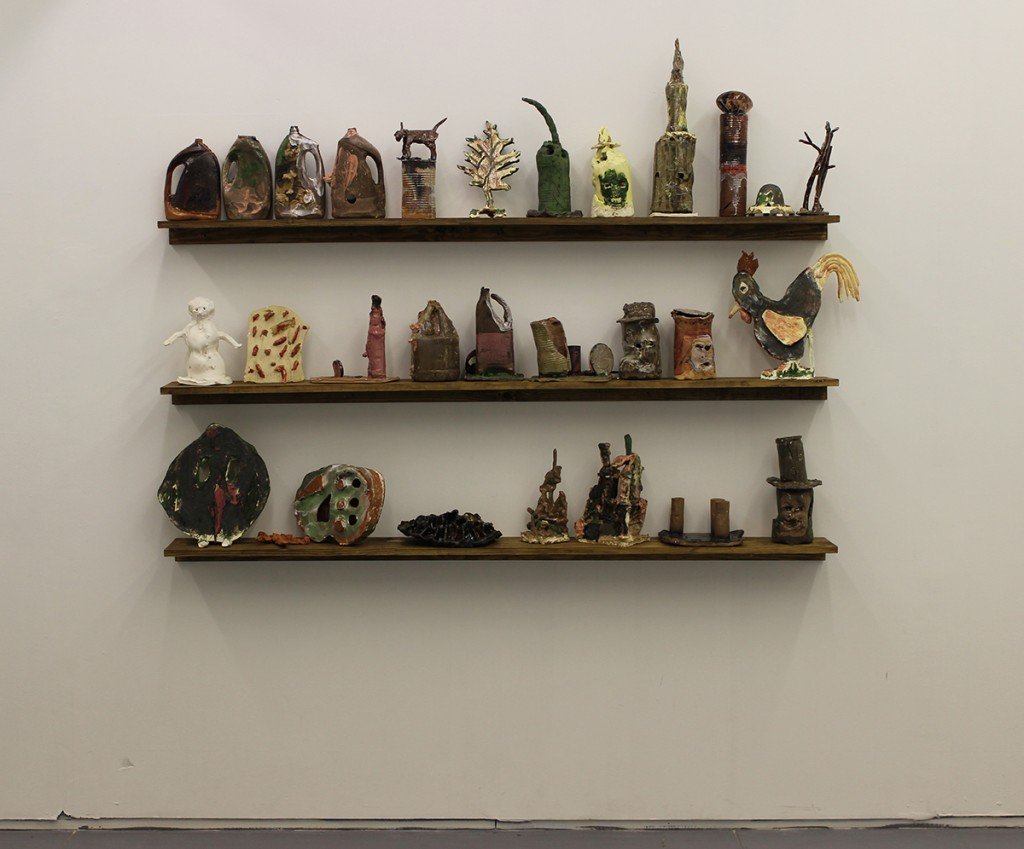 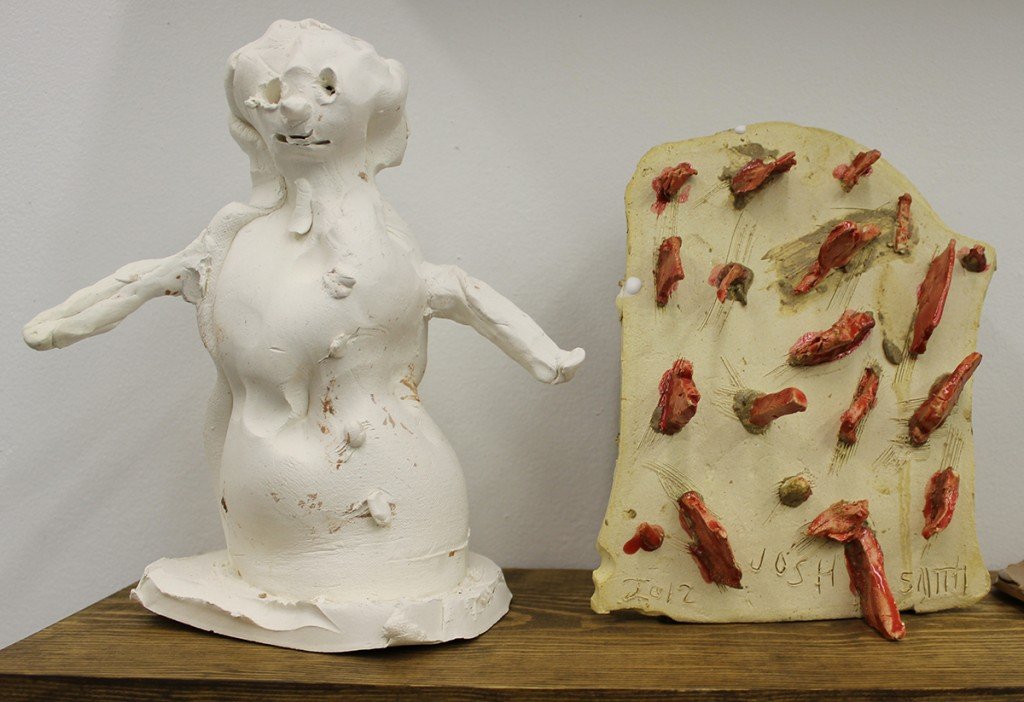 Smith’s shelf of ceramic objects follows a similar strategy: appearing as the ceramic doodles from an elementary art center, they are instantly dismissible as serious objects, which in the gallery context means we begin looking closely for redemptive moments. Objectively, those moments do not exist, but one can begin to find a charming cuteness to the sloppy objects: a salvation from the slickly modern sensibility. The works offer childish nostalgia, un-sophisticated and purely human. They brought to mind the huge, clunky ashtrays of Sterling Ruby in the Whitney Biennial 2014, in which massive ceramic ashtrays become a grand volcanic crater consuming kiln furniture and glowing with vibrant layers of rich glaze. Those works are impressive in scale and visceral disgustingness: they become powerful. Smith’s ceramic works are an inversion of this power seeking to become small, quaint or mundane: a form of trash only precious to the maker. These ceramic works are not necessarily Smith’s humbleness, but rather awareness that purely human sensibility, untrained and unmediated, is another art taboo to be prodded and used, a sore spot for aesthetes that has become a new commodity.

Smith’s willingness to question norms by offering the worst crafted version of an art world trope exposes a perverse desire of the art world: to participate in the failure of art as a sincere practice, a sad joke that reveals a true interest in a return to humanity. Smith’s further awareness of his place as a commoditized artist offers a competing sardonic stance towards commercial collecting to include his kinder-kitsch, which perversely, can easily be had in a more pure form without the need for money or layers of irony. 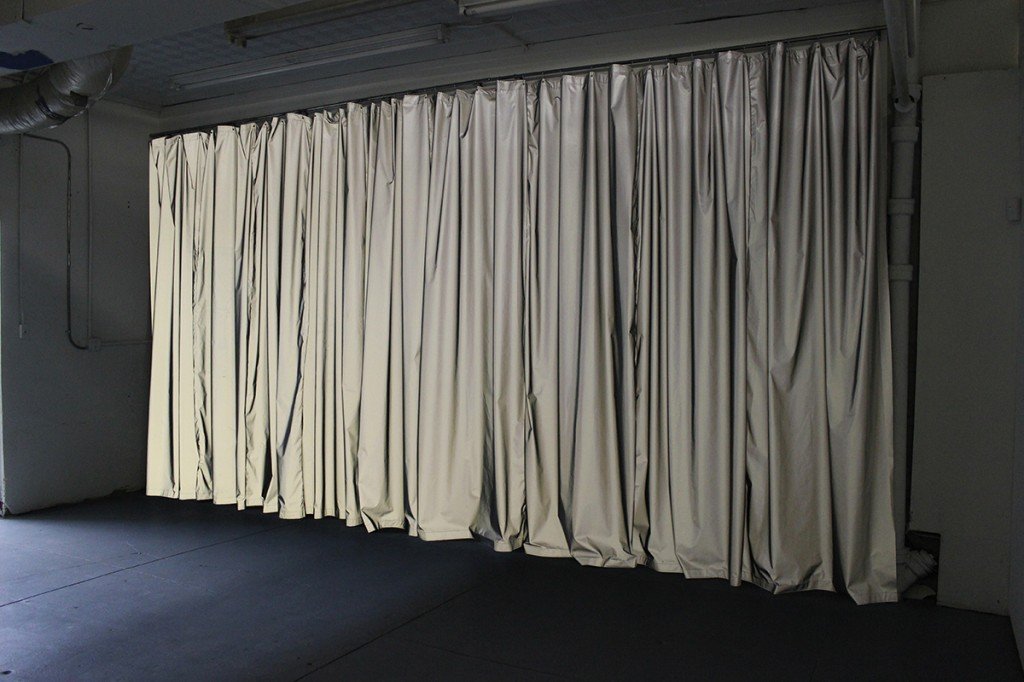 The equally successful Jose Lerma, carried by Andrea Rosen [link] and Kavi Gupta [link], has work located in the back two rooms, the first of which is a dark space with only a curtain hanging against one wall. The curtain is made of a reflective surface (similar to safety striping for bicycles) that collects and refracts ambient light seeping into the space. The work does the exact opposite of Smith’s, teasingly drawing the viewer into perceptual play as we duck and bob catching light from the shiny thing, admiring and seduced by the object. The piece, an open gesture made with one material, is the type of ambiguous work vacant of immediate agenda that begs for extrapolation: theatrically refusing our anticipation the curtain hides nothing but the empty gallery wall, reflecting our gaze; our desire thwarted yet fulfilled by itself while the potential for mystery remains. However, the piece can easily allow for multiple commentaries as the blocking device is the perceptual device, pure surface with the content contained in it’s lack of content to reveal. 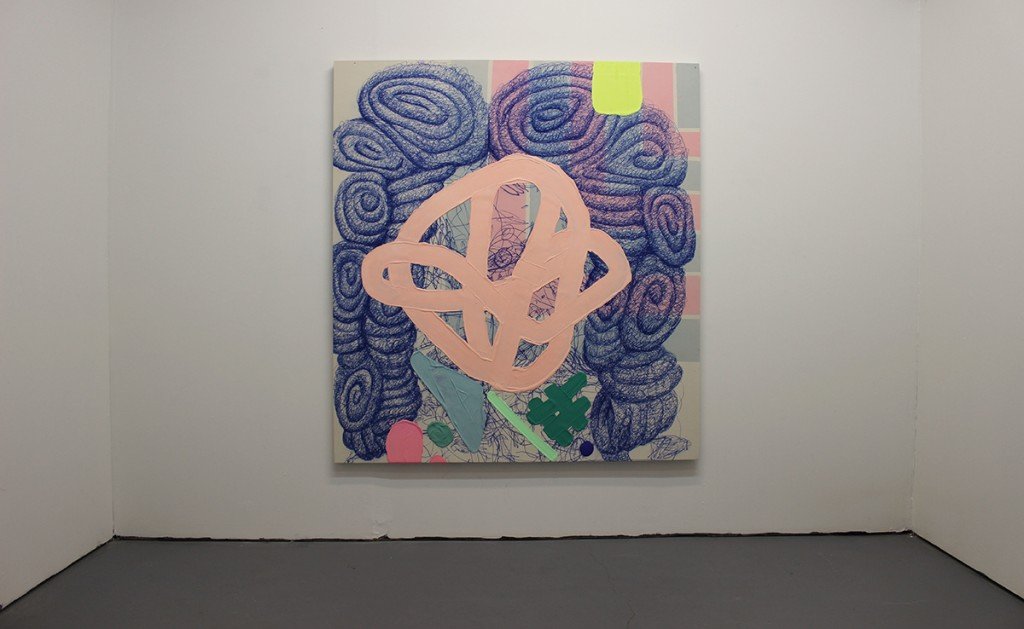 Lerma’s single painting in the back room is fantastic, bearing no obvious commonality to the reflective curtain. Comfortably disconcerting with a goopy pink diagram at the center overlaying Spirograph-style tornados of sharpie the work is compositionally balanced while employing a wide range of techniques and media. The mastery needed to create a successfully layered, seemingly casual, and highly active work out of multiples styles while somehow remaining playful remains elusive for most artists. As an anchor to the exhibit it offers a more comfortable experience than accepting Smith’s high/low backhanded kitsch or Lerma’s empty-except-for-you curtain. It is a work that can exist on it’s own, free of gimmicks or meta-conceptual inquiry, without need for over wrought interpretation.