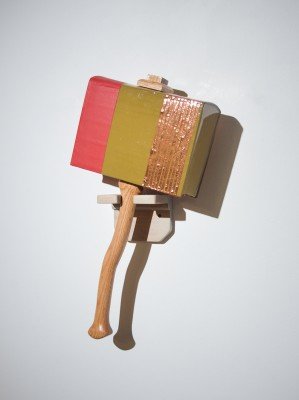 The curator rescued 100’s of patent books as they were being dumped. The premise of the exhibit is to convert the books into “art,” either being inspired by them, using the pages, or whatever else you may come up with.

After making some ‘redacted poetry’ from several pages and drawing on a couple more I felt that I was somehow not utilizing the stupendous immensity of this book larger than most dictionaries. And, of course, the book is completely irrelevant now: a dead weight. To bring the zombie tome “back to life” it needed a purpose, a use.

Giving this revitalized book one purpose may be too easy when it contains many plans, ideas, and structures that have never be realized.  Especially if one considers that each plan has the potential of inhabiting a possible past or future. This is a romantic approach to multiverse quantum mechanics: every idea proposed (and unfulfilled here) can be living a full life in another dimension, one more fertile or susceptible to the proposal. 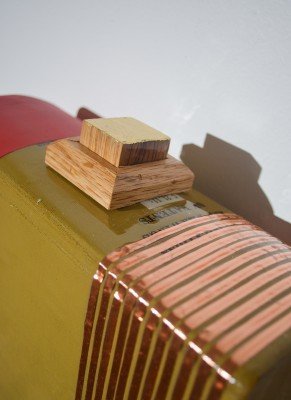 As such, one would need to open dimensional gateways, to access these interdimensional realms. Jaques Vallée, a ufologist, proposed the interdimensional hypothesis for UFO’s, but more fictionally apropos would be the example of Thor’s hammer, Mjolnir, allowing him to travel to the mythical Asgard. My magical book hammer -made of mostly un-manifested knowledge full of potential- would, like Thor’s hammer, be a powerful weapon of possibility.

Speaking of weapons related to quantum theories, if you are a sci-fi geek you will know China Mieville, and perhaps his character Uther Doul who wields the Possible Sword, where the sword exists in all possible instances at once. It is wired up the swordsman’s arm, attaching to a type of battery holding a few seconds captured from ‘probability mining’. An interesting metaphor, as one must consider what kind of tool (hammer?) one should use when “probability mining.” 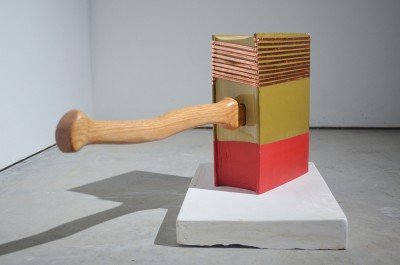 However, in our case, all of this potential future is permanently sealed inside the book, limiting it’s role to a tool or weapon: a brute’s use of knowledge to bludgeon made manifest. In many ways it becomes a reflection of the dumbing return to physicality and reality over dreaming. A simplification of the creative drive, the science, and the engineering packed within a ‘potential tool.’ That’s right: it is art right now, and thus not a practical tool, only a reference to a tool and it’s myriad uses, while unavoidably commenting on society.

If in the first act you have hung a pistol on the wall, then in the following one it should be fired. Otherwise don’t put it there.

Once a handle is attached, an object should be used. It is a promise that the art world does not keep: you are not allowed to touch, reality does not exist here, only unrealized potential.