Compiling several disparate systems of thought, Ryder’s newest piece presents shifting amalgamation of ways to produce a Utopia. The piece is a study in the complexity of thought necessary to produce ideas versus the purification of ideals as a redaction of complexity and the resultant loss of individuality. 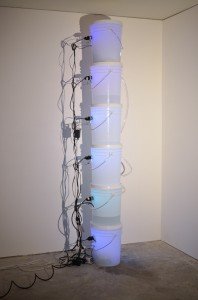 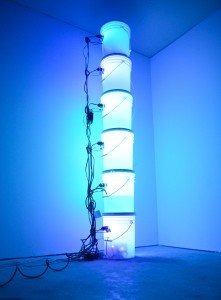 The piece is compiled from six 5-gallon buckets, the middle four forming a triple-purification system using ceramic filters. Utilizing a ‘low’ technology (often survivalist) to remove 99.9% of contaminants, the water is pumped back to the top as a never-ending process of re-introduction to contaminants and subsequent purification. Metaphorical and practical, the use of water has a tangential reference to psychology through Masaru Emoto‘s studies on water crystal shape alteration due to emotional energy. 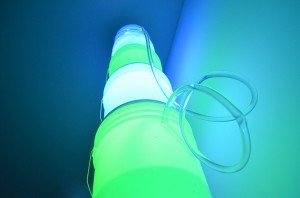 The lighting is based on mood-studies to both calm and entrance paired with two video projections in the top and bottom buckets. The top projection is a series of Tibettan and Cosmic hypnotic scenes from Youtube set to Gamma Binaural Beats (35 Hz +) while the lower projection is a filming of the hypnotic videos projected into a 5-gallon bucket of purified water set to Delta Binaural Beats (less than 4 Hz.) The Gamma Hz reflects the pattern of brain waves at highest functionality of complex, creative problem solving, while Delta Hz is beyond deep sleep into out-of-body experience. As such, the higher beats reflect the active levels drawing from many sources, a problem solving system in which Utopian ideals are born, while the lower beats reflect the an anti-logical willingness to let go of one’s self in order to merge with the greater consciousness.

Of course, the system is closed only allowing for itself to operate upon itself, both obfuscating and abstracting it’s content to outsiders. Oddly, it is powered through an external umbilicus, which does not allow for complete isolation, much as many fringe ideas/communities are fueled/fed by the society from which they attempt to distance themselves.