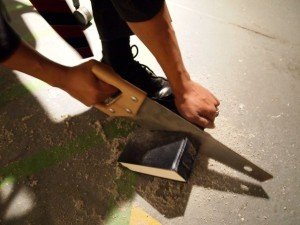 (ALERT: the reviewer participated in and coordinated this event, therefore he has special insights and vested interests.)

“Ergonomics of Futility” provided a platform for dissension in trust and a spectacle of absurdity based on the most serious of problems: economic disparity and corporate hierarchy. Thomas and Joglekar developed the one-night-only performance at a temporary venue in South Dallas. The event was reminiscent of Gilliam’s “Brazil” as the bizarre, systematic actions undertaken by the performers produced a cyclic system devoid of tangible benefit… except for the possibility of offsetting inflation one dollar at a time.

In this corporate parody ‘art’ was created in the most inefficient manner possible: by developing a business model with management and employees at work in an office setting. Active at ‘work stations’ four performers engaged in tasks such as endlessly transcribing Melville on a loop of paper, hand sawing through books, and singeing ever-devalued dollars, whereupon a ‘worker’ would apply gold leaf and, finally, pin each revalued bill to the wall as a finished ‘product’. The catch is that the ‘workers’ had to earn the dollar bill, which allowed them to continue their ‘job’ of destroying the bill. Executed with all seriousness, these futile actions rewarded mindless repetition and an abundance of sweat over the typically lauded virtues of intellectual aptitude.

This faithful adherence to a task, for which one might be paid or praised, produced a level of devotion to the system that blinded the performers to the objects within the room. Tins of corn-syrup on the floor reflected the words “Trust” and “Lie” while a golden bedpan with the word “Hope” scrawled on the side promised the joys of a decrepit retirement. Another piece featured a large magnifying lens focused on a postage stamp with the image of a god: an artificial inflation of a miniaturization and commodification of our beliefs. Each one of these objects placed within the gallery, a warning of greed and consumption, offered a sardonic observation on our misplaced trusts in a flawed economic environment.

In the performance the fallacy is pointed out with clarity, yet without effect, as the ‘workers’ continue to work oblivious to the signs surrounding them. The devotion within this systemic idiocy developed Kafkaesque levels of frustration that became stymied by a more realistic vision of a corrupting psychology among the ‘workers.’ Reminiscent of the 1971 Stanford Prison experiment, each performer worked themselves into their role losing individuality as a byproduct of corporate machinations. Within their myopic roles the occasional reprieve was doled out by a ‘manager’ wielding a white golf club who would kindly turn on a digital projection of an office water cooler. The workers could then move out from under their spot lit stations to enjoy a mirage of sustenance and camaraderie. This, of all the actions, became the most heart rending as the ‘workers’ accept such a paltry, hollow reward with such gratefulness.

“Ergonomics” functioned as a reflexive, anarchistic critique utilizing humanization to explore the folly of our current economic system. In setting paradox against contradiction the event proposed that our actions within the corporate system are unquestioningly destructive, not only of value but of our humanity.