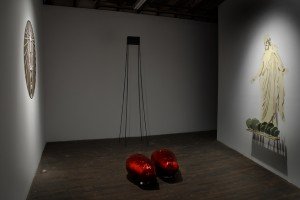 The new project space at 500 X has balls: big red, glittering, pig balls. Thanks to Mark Collop’s exhibit, “Hunters Welcome,” the space offers a disturbing commentary on hunting culture and masculinity complicated by sacral references. The installation reveals hunting’s situational power, and subsequent deification, while exposing its gruesome underbelly… or something close to it.

Why should we care if a fringe group of armed citizens finds sport in hunting and all the subsequent tomfoolery surrounding death, guns and alcohol? Because this previously time honored profession of hunter has become obsolete as a practical necessity in America, yet continues to offer a very real, possibly pathological and primal, experience to many men and some women.

Collop offers a glimpse of this experience, providing a quasi-spiritual iconography offering absolution in the wake of barbarism. Hunting, often learned through a period of apprenticeship from fathers or friends, generates a social exclusivity. While not quite “Fight Club” or secretive Masonic rites, many activities and motivations have no adequate explanation outside the context of hunting. The exhibit offers insights from an initiate, setting up a room with a deer blind, a video of deer, and large wall symbols surrounding 3-foot-long pig balls covered in red glitter.

These aggrandized, yet playfully constructed, testicles are the focus of the space based on events the artist witnessed while on a hunt. As a token of masculine pride and, by removal, a trophy of domination, the pieces reveal a bizarre depravity, reminiscent of “Lord of the Flies,” and more closely related to warfare than actions taken by weekend warriors. 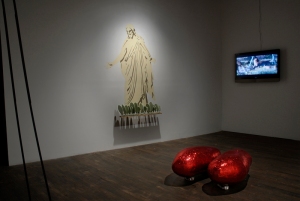 Providing context for the exhibition, a miniature deer-blind on tall, spindly legs observes a video of scampering deer broadcast on a television monitor. The blind’s justice is as anonymous as the deer are clueless, aligning the action of death with power rather than hunting prowess. As if to condone this hierarchy and man’s place within it, a large, painted image of Jesus is invoked to bless these actions. Further complicating the spiritual justification a large modified logo for “Jagermeister” (translated as Master of the Hunt) dominates the opposing wall. While primarily known as a herbal liqueur, rumored to contain Elk’s blood, the origin of the logo is based upon the revelation of St. Hubertus, once a master hunter, who saw a vision of Christ between the antlers of a stag causing his instant conversion and a Job-like faith that ensured his martyrdom.

The spiritual epiphany and relation to a higher power in hunting is often linked to evolutionary biology, as hunting provides a “heightened awareness,” which affords the hunter a profound unity with his surroundings (see philosopher Jose Ortega y Gassat’s “Meditations on Hunting”). Unfortunately, the modernization of the sport provides fewer opportunities for this level of natural epiphany, offering instead a weekend of debauchery and savage catharsis. Which is also an attempt at an authentic experience, a reflexive release, before modern man returns to the mundane.

“Hunters Welcome” explores–amidst a series of contradictory rationalizations such as the invocation of Jesus, spiritual epiphany through alcohol, genital trophy taking, and killing from on high with bolts of lead– the very real possibility that socialized barbarism  provides revelation.